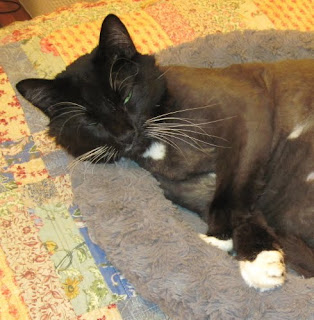 My fabulous boy-cat, Ziggy, has vanished. He went out as usual on Tuesday morning. However, usually I make them wait till it's light outside, but that morning he was raring to go - so I gave in. It was about 6 am, and still dark.

Ziggy had proven to me that he would not run off - he always stayed close to the house, with an occasional visit next door with his cat-friend, Max. And, he always came when I called him.

He usually was in the front yard when Barney and I went for our daily walk at about 9am, but on Tuesday, he was not there. I figured he was with Max. Then, we needed to leave at 3pm, so I called and called, and nothing. So, when we got back at about 7pm, I called and called again - no luck. So, we started searching. More nothing!

We live in an area of town called "The Woodlands". It's called that for a reason - there are areas in the neighborhood that have lots of trees and woods. It's why we spot deer once in a while. Also, there have been known to house coyotes and foxes - and this year, there has been a black bear running around. But, for some reason, I was never worried - of course, I never let the cats out in the dark, either! Don't bother beating me up - I'm doing a fine job of it by myself. Yes, I KNOW BETTER!!!

I had convinced myself last night that Ziggy had probably met his demise by one of the critters, and I just had to accept it. Then, I had a dream that I saw him at the neighbor's house, and he was hurt. I woke up with a new purpose! I figured that no one would be able to pick him up (he runs the other way whenever anyone tries) - and we live in a very small town without a shelter. But, IF he was attacked and hurt, maybe someone would take him to one of the vet hospitals in town! I just knew that he was sending me a sign! I impatiently waited till they opened and called, expecting him to be there. But, alas, no one has brought in a sweet black cat with white paws. So now I'm back to trying to accept this. I miss him terribly.

I'm so sorry! I've been in the same situation and it is so distressing. I hope he's just holed up somewhere and comes home soon.

OMG Nancy, don't I know this feeling... I am so hoping he turns up... Don;t give up on him yet.. Is he neutered? you know male cats !!!
Remember when Jake got out a few months ago? First time and all day and night til the next morning.. and he was hiding under the barbecue covering right next door.
No I won't beat you up .. I am so sorry that he's not at home .. Let's hope he gets back ,in the meantime put a few flyers on poles around the neighborhood,, they don't go far and someone with a heart may have taken him in.. I'll say a prayer for you.. please let me know right away if he comes home... BJ

got my fingers crossed too. Hopefully he is just tom-catting around (so to speak) I will check in for more news...sending good thoughts your way.

Thank you all for your kind thoughts. Yes, he is neutered, so that isn't an issue, but he lost his collar, and I hadn't gotten it replaced. And, he doesn't have a chip - I guess I never thought I'd be in this predicament. I don't think I'll ever stop looking for him.

You can't really totally coop a cat up. They just are not happy that way. And the little fella is just likely to turn up. Don't give up hope just yet. And many people will post an advertisement in the local paper if they find a cat who has obviously been well cared for. Who knows what lurks in the minds of cats...

Nancy, I hope Ziggy shows up safe and sound. I hope he is just having an adventure.

Cats are very strong and resilient, I have 7..HAHA. I know what this feels like also. My fluffy calico dug her way out from the screen porch in the spring last year. She got out twice, until i built lattice around the outside of the porch so she cant get out. I look in the dark in my PJ's with a flash light...Calling and calling. I would have looked all night, she was next door under my neighbours truck. She ran past my husband and right to me when I was calling her name. Lucky she never got out again...One day when you least expected he'll come home...

Thank you all! It seems like everyone that I talk to about this, has a story about a cat that came home. I hope that happens to me!

I was so hoping that by now that your baby will have come home. So sorry to hear that he went missing. Thinking of you.

So sorry you have lost your pal.
I am hoping Ziggy will return unharmed very soon.