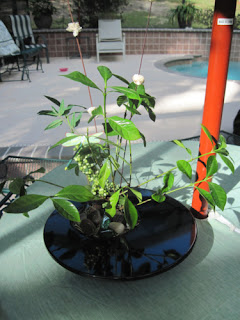 So, today is my birthday!  This plant arrived in the afternoon from my daughter (who lives in Kansas City) - I thought it was a little different, but I kinda like it.  The card on it said it is a Money Tree.  I called Serena and was describing the plant, and she asked me to send her a photo of it, so I did.  Later, I received an email from her saying "This isn't what I ordered!"  Later we spoke again, and she said she had called the florist here in Dunnellon, who told her that no, this isn't a money tree!  It's some kind of gardenia.  So, the florist will call me tomorrow to see what I want to do.


On top of that, my dear husband (who NEVER orders flowers) took it upon himself to order me flowers for my birthday this year.  Of course, the flowers never showed up -- and when he called them, (long story short) they discovered that the order was never put through!  So, after much huffing and puffing, he agreed to getting my flowers tomorrow - at a 30% discount, of course!


But, I did get a chocolate cake from my sister!  That's the good news!
Posted by Nancy Eaton at 8:30 PM

Nancy, what the heck kind of birthday was this? Wrong money tree, wrong flowers.?/ Happy Birthday anyway... from me... BJ

Happy happy birthday, Nancy! Despite the pretty plant and flower snafu, you still got a cake!! And now you can have two days of celebrating when the correct flowers come!! $$ trees? I like that idea!

haha..reminds me of a few birthdays I have had!!! glad you got the cake!!!