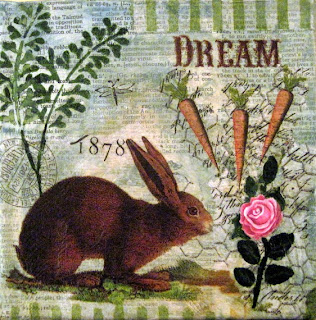 Here is Jack Rabbit - best friend of Peter Cottontail!  He's another image on the same napkin.  Thought it very fitting for Easter.

In other news - I had a little critter in the house for a couple of days last week.  First saw him on the fireplace mantle (Penny was pacing down below and was seriously on point!) - first I thought it was a mouse, then I saw the tail - and decided that it was a baby squirrel.  How he got into the house is still a mystery.  I went to find a box to hopefully get him into, and he disappeared!

Next morning, Penny went into extreme hunting mode, and had him cornered again in the sunroom!  Poor Baby!  So, I shut the doors and opened the door to the pool deck, and finally he ran out.  From there, I was able to get him to run out the door to the great outdoors!  But, while I was watching him, I decided that he really wasn't a squirrel - but a chipmunk!  Cutest thing in the world - but I'm so glad that he didn't die in my house!

Living in the woods is so charming!  (Tongue in cheek)

You don't have to live in the woods to have critters. We have had muscovy ducks "fall" down our chimney and be in our fireplace 4 different times! Now my husband puts a brick across the chimney every spring.

OMG - Maybe I'm lucky that my critters are small!

Oh Nancy how cute is that???
I know I used to have all sorts of critters..
Your piece posted today is (I think) your best work ... I just love it .. BJ