All Out of Proportion! 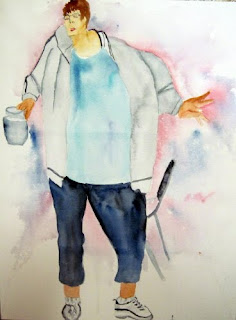 12" x 16" Watercolor
I truly wasn't going to post this, cause I think it's just too silly --- but, here it is anyway! Several months ago, Pat took a bunch of pictures of us and told us we would do something fun with them later. Well, last Tuesday became "later". The technique is this: We divided our watercolor paper into 16 squares - but they weren't all the same size. Then, we took an 8" x 10" copy of the photo, and folded it into 16 equal squares. Then, we drew whatever was in a square to a corresponding square on our paper. Then paint! So, some portions of the photo are enlarged, and some are reduced! Had I understood what was going to happen, I would have a larger head and smaller body!!! Of course, I made the face not look like me!! It turned out to be quite a charicature!
Posted by Nancy Eaton at 7:59 PM

Nancy, I sure think this is hysterical! A fabulous and fun piece!

That is sooo funny, thanks for posting!

And have we not all seen real people that create just an image in our minds. What a fun little blog entry loved it. Made my day start with a laugh.

love this Nanc, and hurrah to you for posting it.